President Bars Some MIlitary Equipment: Not Exactly The Perfect Solution

Daily neighborhood patrols should not become a military presence. Military weaponry and apparel should not be rolled out cavalierly on unarmed citizen demonstrations or routine daily policing details

These are situations where Law Enforcement needs to step up to a massive armed threat and should have the resources to effectively do so.

In 2015, these tools are a necessary option. Law Enforcement cannot protect the citizenry if they are outgunned.

Back on February 28, 1997, in North Hollywood, law enforcement was caught off guard when they descended on a heist-gone-bad that turned into 44 minutes of gunfire as the robbers sprayed some 1,100 armor-piercing bullets at officers and nearby homes.

Yesterday, in Waco, Law Enforcement was able to stop and arrest hundreds of armed gang members who for a few deadly minutes turned the Twin Peaks parking lot into a kill zone.

Why? Because Law Enforcement was ready with the right equipment. There were zero Law Enforcement or civilian casualties.
President Obama on Monday ordered the federal government to stop distributing a limited inventory of military equipment to local law enforcement agencies across the country because, he said, it makes police seem like an “occupying force” instead of public servants.
Speaking to a crowd in Camden, N.J., Obama contended that the heavy use of war zone equipment gives people the wrong impression about the role of police and fuels a sense of fear and anger.
White House steps up warnings about terrorism on U.S. soil
“We’ve seen how militarized gear can sometimes give people a feeling like there’s an occupying force, as opposed to a force that’s part of the community that’s protecting them and serving them,” Obama said. “It can alienate and intimidate local residents and send the wrong message.”
But while the change stops the handover of some equipment, including weaponized aircraft, bayonets, grenade launchers and armored vehicles that run on tracks, it still allows police departments to acquire riot gear, specialized firearms and armored trucks with tires, as long as they get training and special permission from local authorities.
Grenades and bayonets, on Obama’s banned list, are not in widespread use by police, analysts say, and armored vehicles with tires are more common in police departments than tanks with tracks.

One analyst called the president’s order a half-measure that does little to change the perception that the police are a military organization working against the people they’ve sworn to protect.
“The symbolic aspect is really important,” said Pete Kraska, chairman of the graduate program in justice studies at Eastern Kentucky University, who writes about and studies the militarization of police. “They wanted to change the ethos from a warrior mentality to a public servant mentality. But allowing the discards of war to still be transferred, albeit with some new restrictions, to our local police sends them the message that they’re engaged in this warlike endeavor where they need warlike machinery.”
Lawmakers question practice of giving military equipment to police
The caches of local weaponry came under scrutiny last summer when police wore body armor and rode atop armored vehicles during confrontations with protesters after a white officer shot an unarmed black man in Ferguson, Mo.
The jarring images prompted Obama to order his administration to review its equipment transfer policies. His decision to cut off supplies came as part of a recommendation from officials at the departments of Justice and Homeland Security.

But even the new requirement that police get approval from local officials to acquire more commonly used equipment from the Pentagon is unlikely to usher in a new era of close oversight. Departments that received the equipment in the past often won easy approval for all types of gear from local officials, who were persuaded by the “what if” arguments of post-Sept. 11 policing efforts to prevent terrorism.
To announce his new orders, Obama went to Camden, an impoverished city that has embraced community policing, under which officers develop ties within the community and do their jobs partly by knocking on doors and talking to people.
Community policing is far more effective at keeping streets and neighborhoods safer, Obama said after a visit with Camden County police officers.
The officers told him they were getting more help from residents because police had established relationships, Obama said.
“It's not just crisis response,” he said. “... It’s, ‘We’re here all the time, and hopefully we can prevent those shootings from happening in the first place.’”
Speaking to a crowd at a community center in Camden, Obama talked about the changes society must make to confront the deep social problems that fuel the simmering anger that keeps boiling over in communities around the country, a point he made repeatedly after last month’s riots in Baltimore.
Obama contended that police practices can’t solve all the problems in Baltimore, Ferguson and elsewhere.
“We can’t ask the police to contain and control problems that the rest of us aren’t willing to face or do anything about,” he said.
It’s good that the Obama administration wants to promote community policing, Kraska said. But when community policing is pitted against a paramilitary model, he warned, it tends to lose out.
Obama’s changes are a step in the right direction, said Sen. Claire McCaskill (D-Mo.), who opposes cutting the weapons transfer programs entirely.
The programs need change, she said, but “this federal equipment and funding saves lives.”
Likewise, the American Civil Liberties Union applauded the new rules as “a critical step towards rebuilding trust between police and the people they have pledged to serve,” and it urged Congress to enact them into law.
“Grenade launchers, high-caliber weapons, armored vehicles — this equipment never belonged in our neighborhoods,” said Kanya Bennett, legislative counsel at the ACLU.
christi.parsons@latimes.com

The Man Who Stole Puerto Rico
“Porto Ricans are a heterogenous mass of mongrels incapable of self-government… savages addicted to head-hunting and cannibalism.”...
WARAGAINSTALLPUERTORICANS.COM
Posted by HORN OF JUSTICE at 11:54 AM No comments:

Billboard: WILLIE COLÓN NAMED ONE OF THE MOST INFLUENTIAL LATIN ARTISTS OF ALL TIME

Instrumental in creating the sound that became known as salsa, composer and trombone player Willie Colon also did much to cultivate the streetwise urban Latino image adopted by artists today. Colon’s collaborations with Hector Lavoe and Ruben Blades, with whom he recorded the milestone album Siembra, are historic; his album El Malo is a classic testimony to the Nuyorican sound and style of the '70s. Colon songs like “Calle Luna, Calle Sol,” “Aguanile” and “Che Che Cole” remain DJ favorites and standards of salsa bands today. 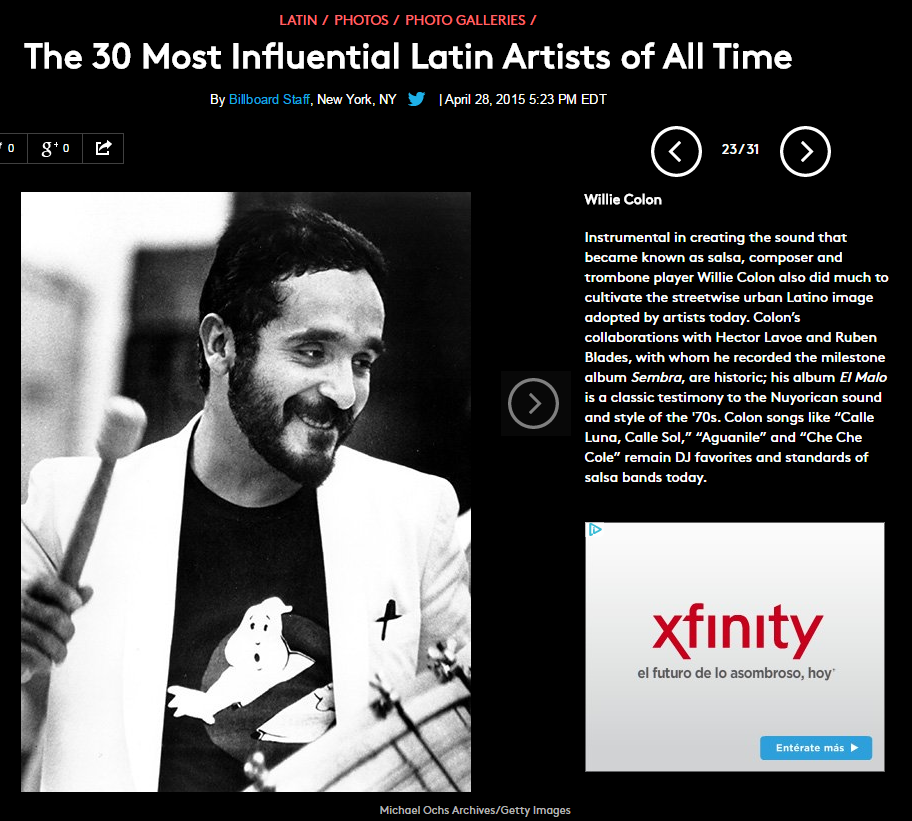 Posted by HORN OF JUSTICE at 9:25 PM No comments: