WE HAVE A MENTAL HEALTH PROBLEM DISGUISED AS A GUN PROBLEM

There was a time when dangerous mentally ill were put in institutions that were like prisons. There were many horrible abuses and policy changed. But have we come too far in the other direction? Do the mentally ill's right's supersede the general public's right to safety.

All of these killers had known mental health issues but were allowed to live amongst the population. Not all used guns to kill.

THIS WEEK TWO MENTALLY ILL PERSONS, A MALE AND A FEMALE ON SEPARATE OCCASIONS, SLASHED PASSERSBY WITH SCISSORS! 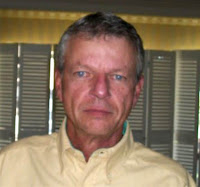 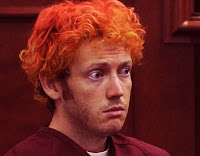 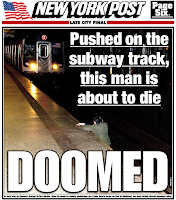 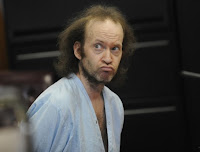 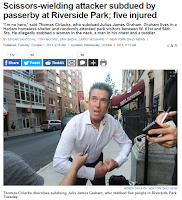 Posted by HORN OF JUSTICE at 10:14 AM No comments:

WHY IT'S IMPORTANT TO KEEP YOUR HEAD WHEN APPROACHED BY POLICE

It only takes 2 seconds to be late on reacting to an attack. Most times that means you lose and will probably die.

A cop is killed on the job every 36 hours.

If you are approached and start to act stupid you become a candidate for deadly force.

This is what cops get for being caught by surprise or late on the draw.

These are just four incidents of the many documented cop killings. So just know that you are playing a high stakes games with you decided to resist or do something stupid. They can't afford to give you the benefit of doubt. They are afraid and ready for whatever may come.


Posted by HORN OF JUSTICE at 4:18 AM No comments:

James Bushey
Posted by HORN OF JUSTICE at 7:04 AM No comments:

WHEN YOU ARE BEING ARRESTED- COMPLY

It only takes a nano-second to trigger a situation that could cost you your life.

POLICING IS NOT A GAME: When you are being arrested DO NOT!


Here's a classic example of a man who got dead for being a fool.

Texas cops shot and killed a man who pulled out a gun, only for it to turn out to be fake.

But bodycam footage from one of the officers proves there was no way for the Palestine police officers to know the gun was fake.
No question it was a justified shooting.
The incident took place May 31 when Sergeant Gabriel Green and his partner, officer Kaylynn Griffin, were responding to a call about a man who had tried to shoplift a case of beer from a Walmart.
Employees told police they saw the man run into a nearby Applebee’s restaurant.
Sergeant Green found the man, James Bushey, inside the bathroom washing his hands. And ordered him to step outside.
Both cops walked Bushey out of the restaurant, requesting his identification where it looked to be headed for a routine arrest.
But once outside, Bushey pulled out a replica Colt 1911 .45 caliber handgun, prompting Griffin to yell out “gun, gun, gun!” as Green tried to wrap his arm around his neck.
Bushey broke free with the fake gun in his hand, then turned around as if he was going to shoot them.

Both officers opened fire, killing him on the spot.


He obviously misjudged the situation he was in. He was smiling and making wisecracks as you can see in the video. Did he believe he could bluff the cops with a fake gun? Did he think they'd all laugh together when he told them it was fake?

According to the Palestine Herald:

During the investigation officers were placed on light duty until a Anderson County grand jury met and took no action against the officers on June 25. The grand jury viewed the footage as part of its deliberations. The officers returned to full duty the following weekend.
Bushey’s family members stated there was no reason for his behavior. Bushey had moved to Elkhart following a divorce and was trying to “get his life back together.” However, the family did admit that Bushey had dealt with previous alcohol problems and was in recovery. Muniz said the toxicology report has been received by the police station, but had not been released to the public.

The Palestine Police Department issued bodycams to officers in January 2015, which in this case, left no doubt the cops were justified in the shooting.
Bushey had moved to Texas from New Hampshire, where he had run-ins with the law involving alcohol and robbery while claiming he had a gun.

James Bushey
Posted by HORN OF JUSTICE at 5:17 AM No comments: