Cartels will exploit the 7,000 strong migrant caravan marching to the US

Cartels will exploit the 7,000 strong migrant caravan marching to the US, warns DHS as Trump vows to halt the 'onslaught of illegal aliens'

By CHRIS PLEASANCE FOR MAILONLINE and AFP and AP
PUBLISHED: 05:11 EDT, 22 October 2018 | UPDATED: 06:49 EDT, 22 October 2018The Department of Homeland Security has warned that Mexican cartels will try to help vulnerable people cross into the US as a migrant caravan winds its way toward the southern border from Honduras.

DHS Secretary Kirstjen Nielsen warned that criminals and people smugglers who 'prey on the vulnerabilities' of migrants will be hunted down and 'prosecuted to the fullest extent of the law'.
She spoke out as thousands of people marched on through Mexico toward the US on Sunday, having skirted around fences and guards along the border with Guatemala.
Up to 7,000 people are now traveling in the caravan, according to the LA Times, though AP reported 5,000 and AFP counted as few as 3,000. 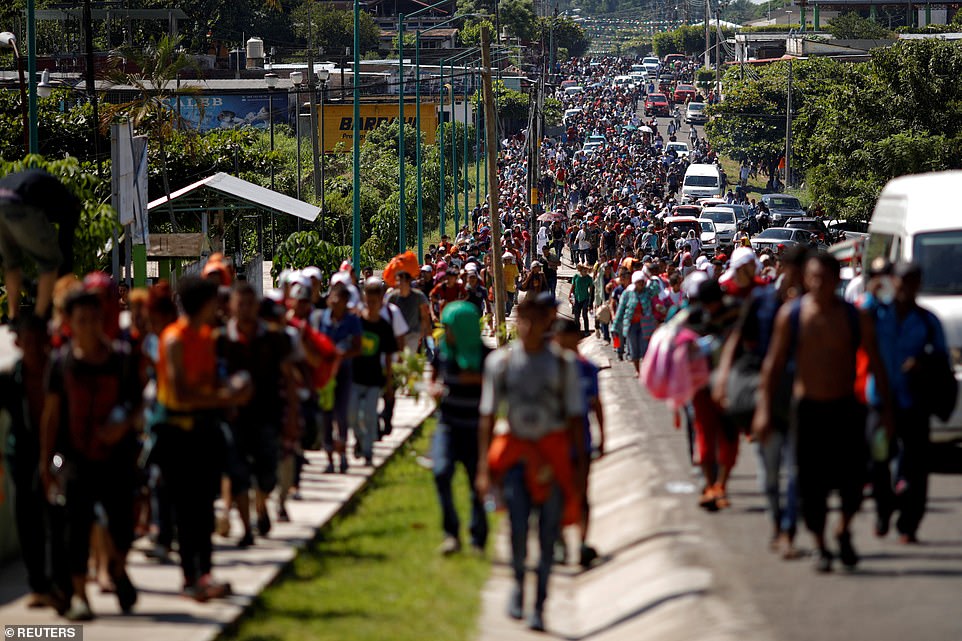 +19
The Department of Homeland Security has vowed to crack down on Mexican cartels trying to help a caravan of thousands of desperate migrants cross from Mexico into the US (pictured, part of the caravan in Mexico) 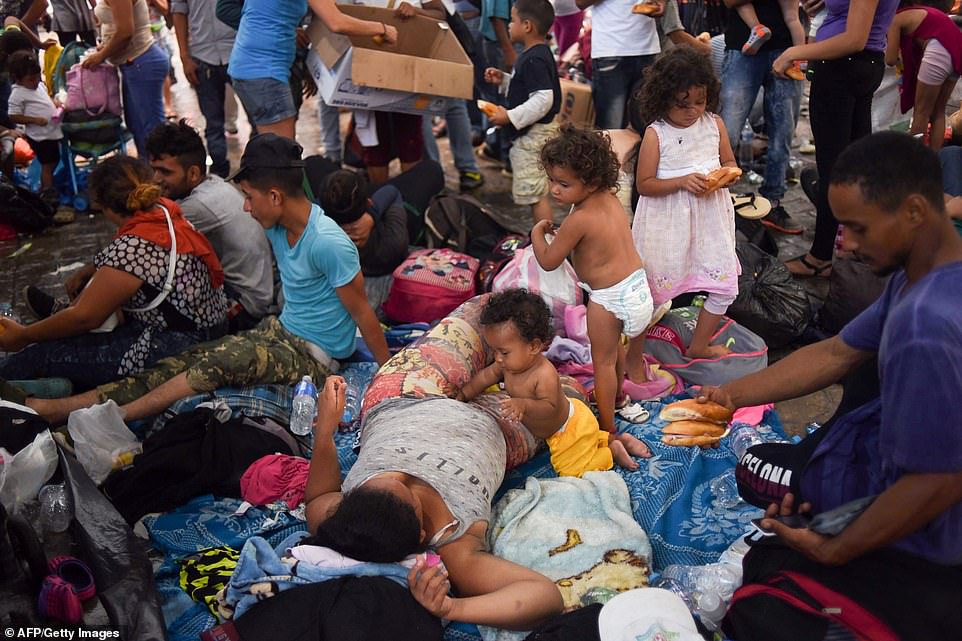 +19
Around 3,000 people have crossed from Guatemala into Mexico since arriving on Friday, down from around 5,000 after many gave up and returned home (pictured, migrants in Mexico) 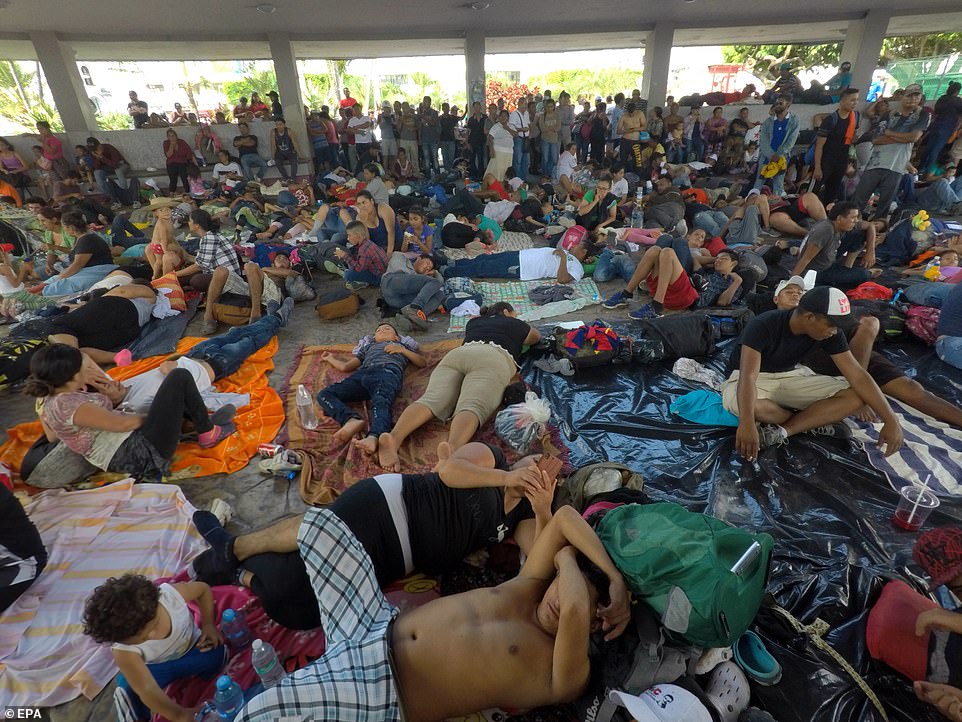 +19
Despite being stopped by Mexican border guards, many Hondurans either swam across a river or were helped across the border by Mexicans using pickups and trucks (pictured, migrants in Mexico having crossed the border) 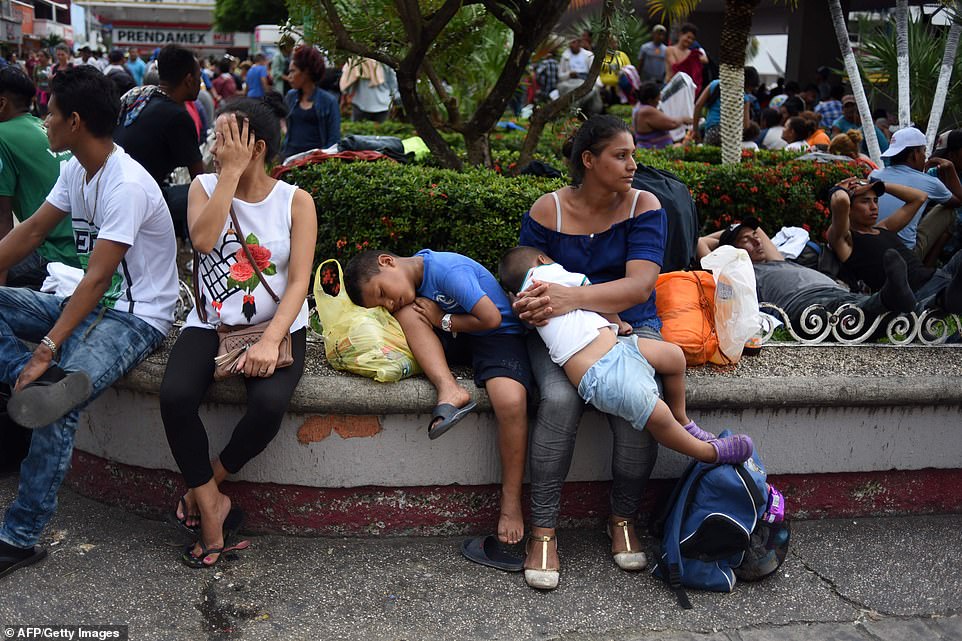 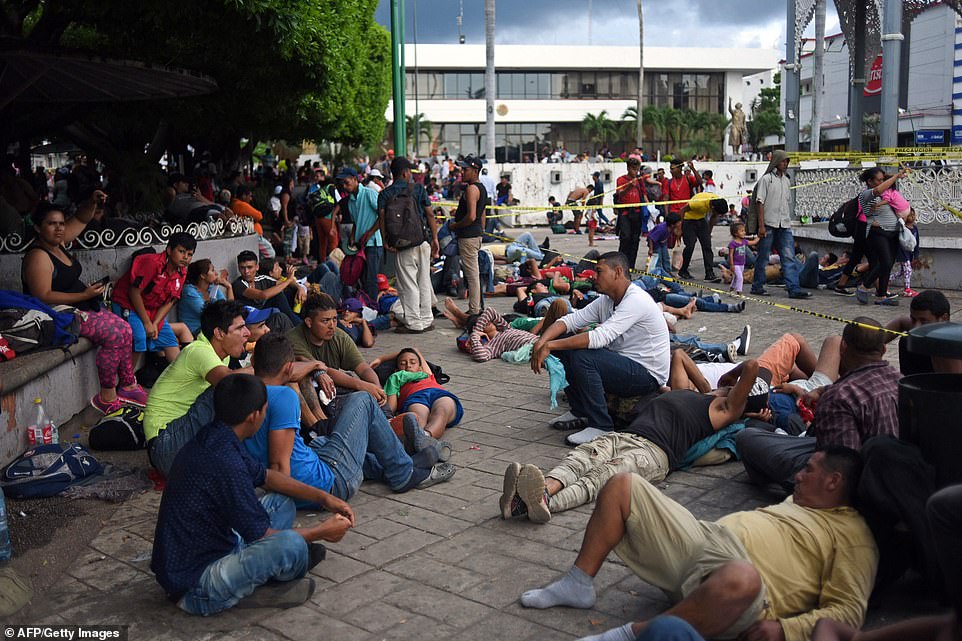 +19
Dozens of migrants rest in the main square in Tapachula, Mexico, on Sunday having walked from Ciudad Hidalgo, around 20 miles away on the border with Guatemala 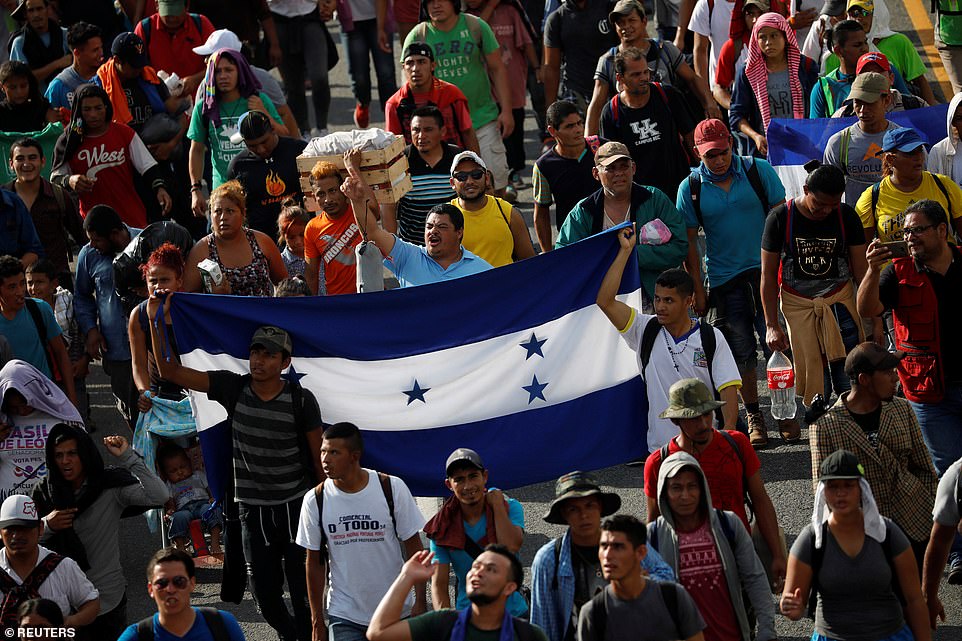 +19
Migrants wave a Honduran flag having crossed the border between Guatemala and Mexico, where they have vowed to continue on to the United States 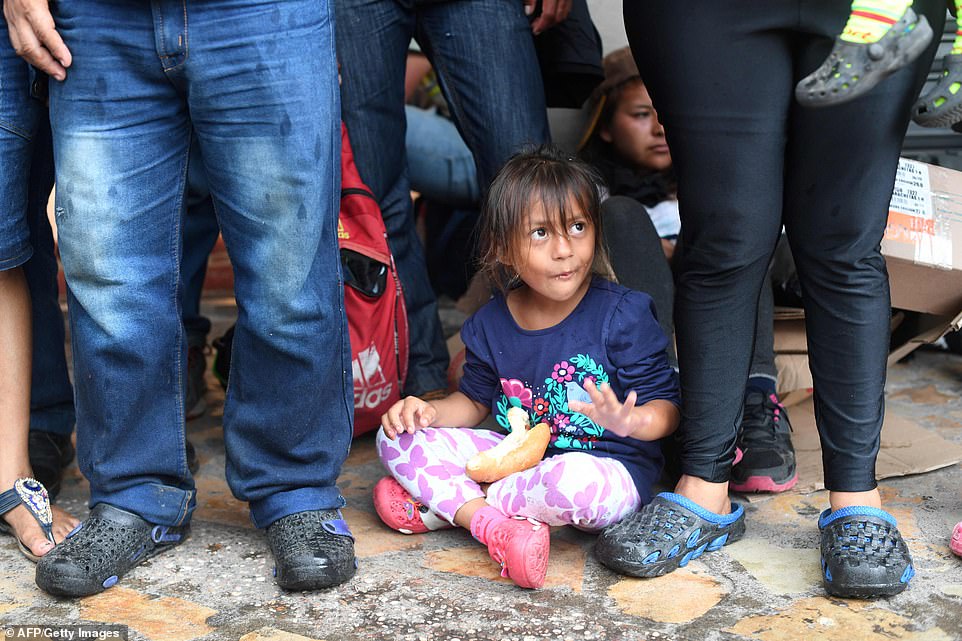 +19
A young Honduran girl eats in the main square in Tapachula, Mexico, after successfully crossing the border from Guatemala
Several thousand are thought to have returned home, some on buses provided by the Guatemalan government, after being blocked at the Mexican border.
But a new group of 1,000 Hondurans has begun the journey, vowing to following in the footsteps of the first.
Mexican officials say 640 people stopped at their border before applying for legal refuge, including 164 women, more than 104 children and teenagers, and many older and disabled people.
Of those who managed to cross the border most ended up in a town called Tapachula, around 20 miles from the border at Ciudad Hidalgo, where they rested on Sunday night before continuing their march.

Share
They now face a daunting slog of 1,600 miles across Mexico before reaching the US border, where President Trump has vowed to turn them away.
Mexican border guards initially drew praise from Trump for their hardline approach after stopping thousands of people from crossing into the country using riot shields and tear gas.
But many later crossed the river on makeshift rafts, or were helped across by sympathetic Mexicans who loaded them into pickups, vans and cargo trucks before driving across.
Speaking on Sunday about the group who had crossed into Mexico, Nielsen said: 'While we closely monitor the caravan crisis, we must remain mindful of the transnational criminal organizations and other criminals that prey on the vulnerabilities of those undertaking the irregular migration journey. 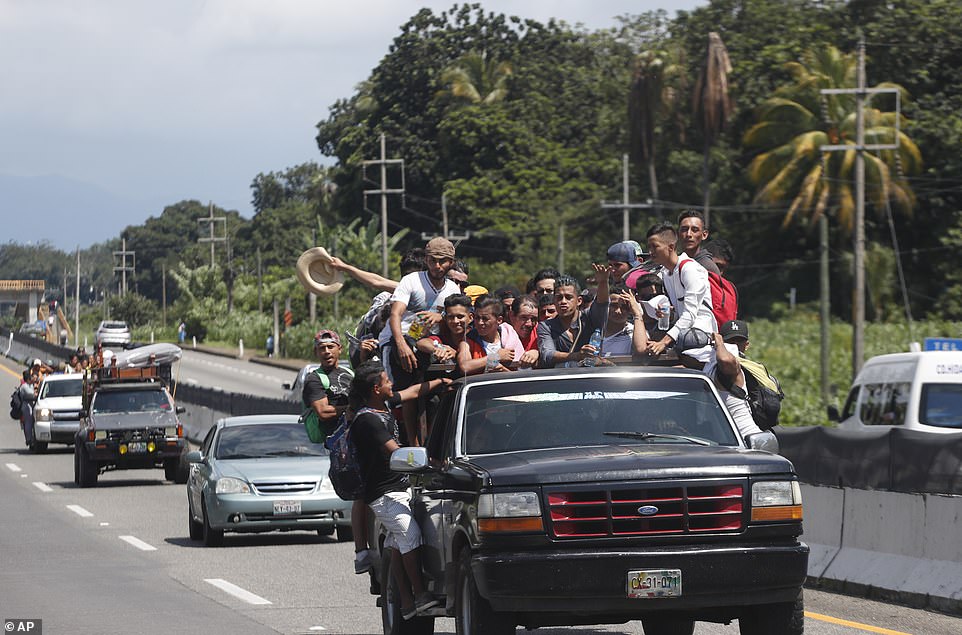 +19
A pickup truck owned by a Mexican driver helps migrants to cross the border from Guatemala, followed closely by another driver doing the same thing (left) 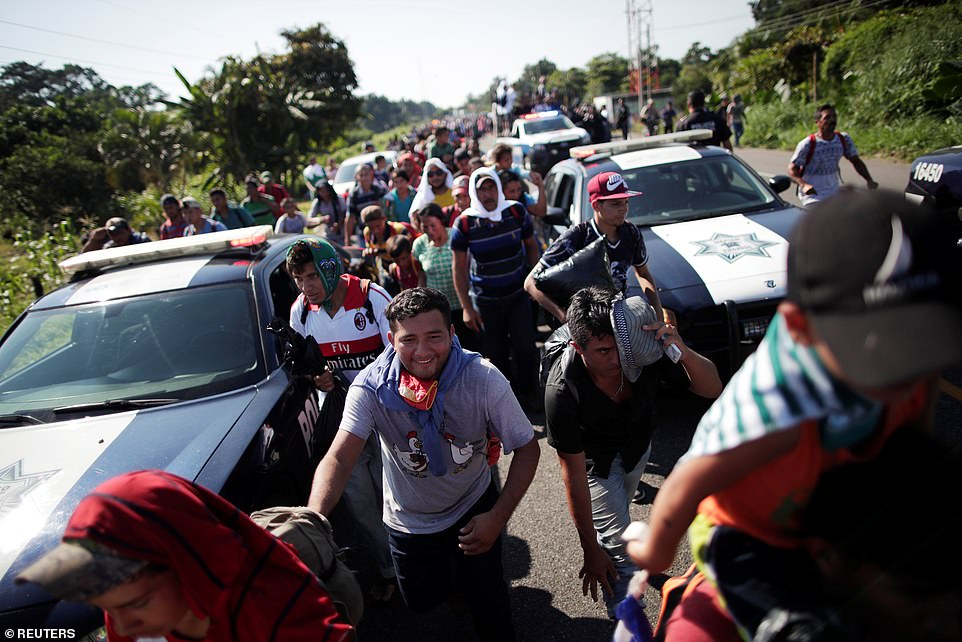 +19
While thousands of migrants were initially stopped at the Mexican border by guards using shields and tear gas, many either swam across or were ferried by Mexican drivers before making their way past police 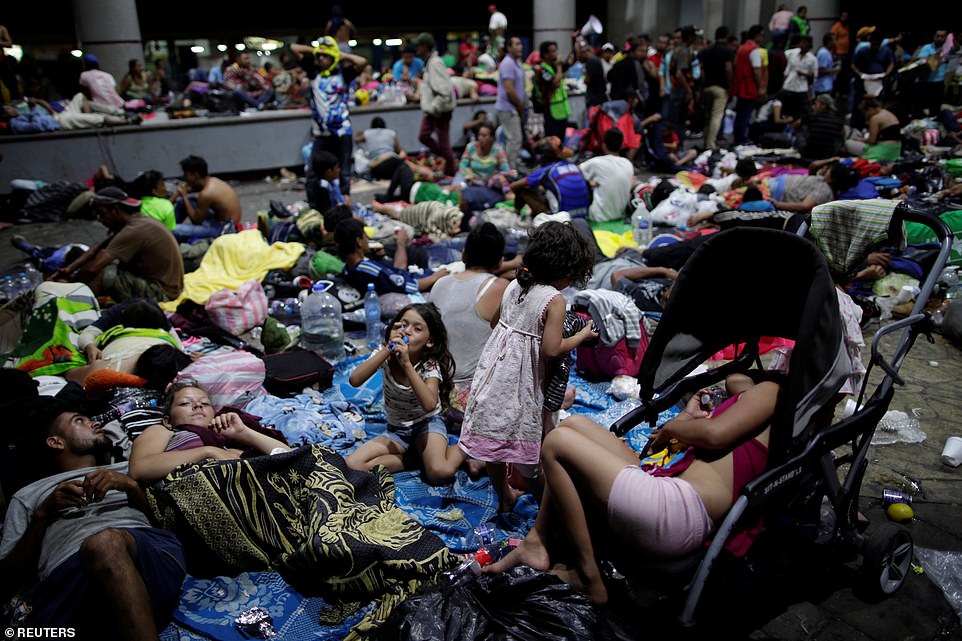 +19
Having already walked to Mexico from Honduras, almost 350 miles away, the migrants now face a trek of 1,600 miles across Mexico in order to reach the US border 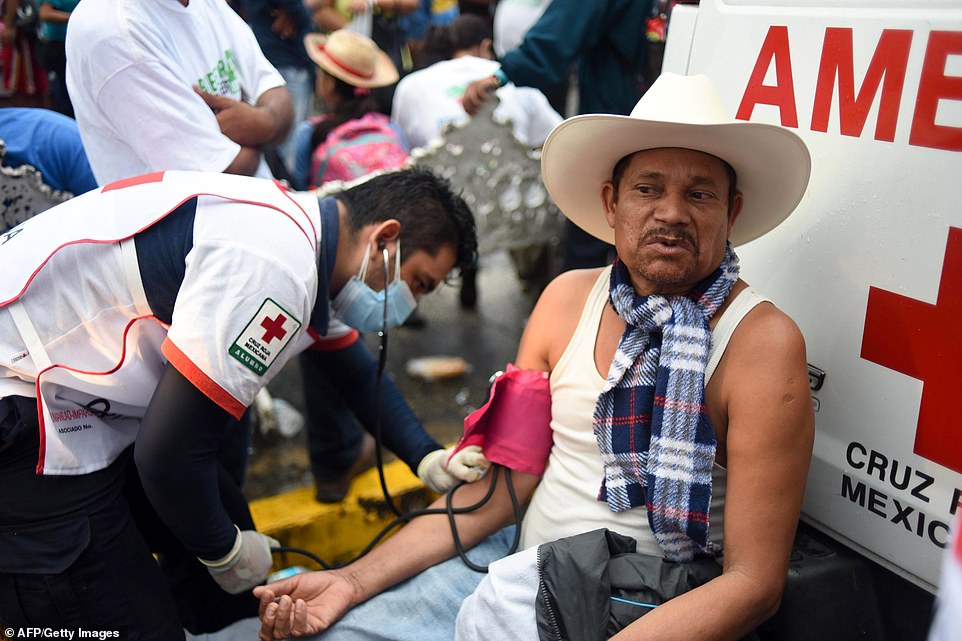 +19
Paramedics check the blood pressure of a migrant in Tapachula, after he made his way across the border 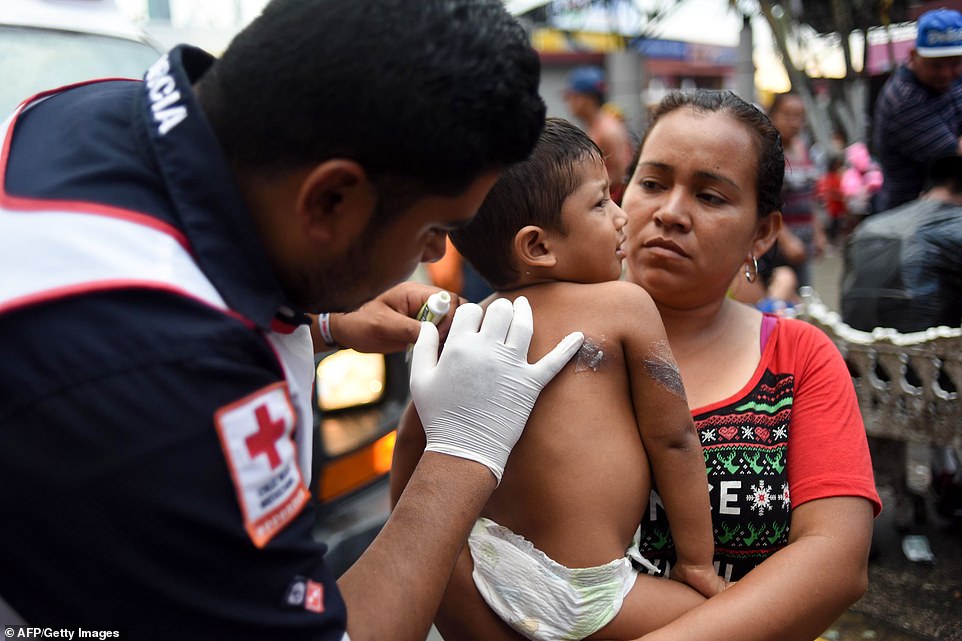 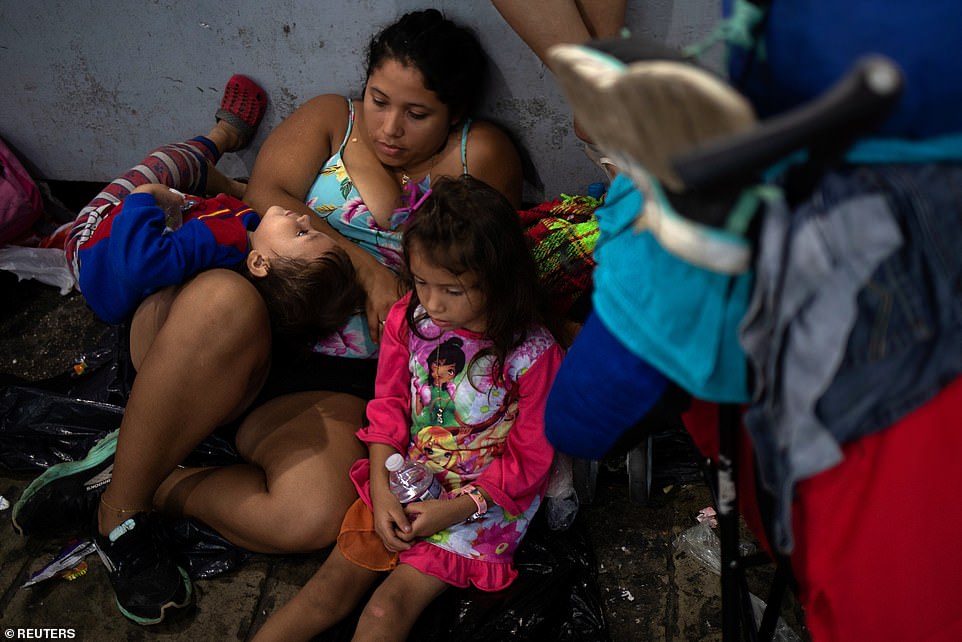 +19
Tatiana, from El Salvador, sits with her children Michael Daniel, 3, and Maria Teresa, 5, amid a caravan of thousands of migrants from Central America 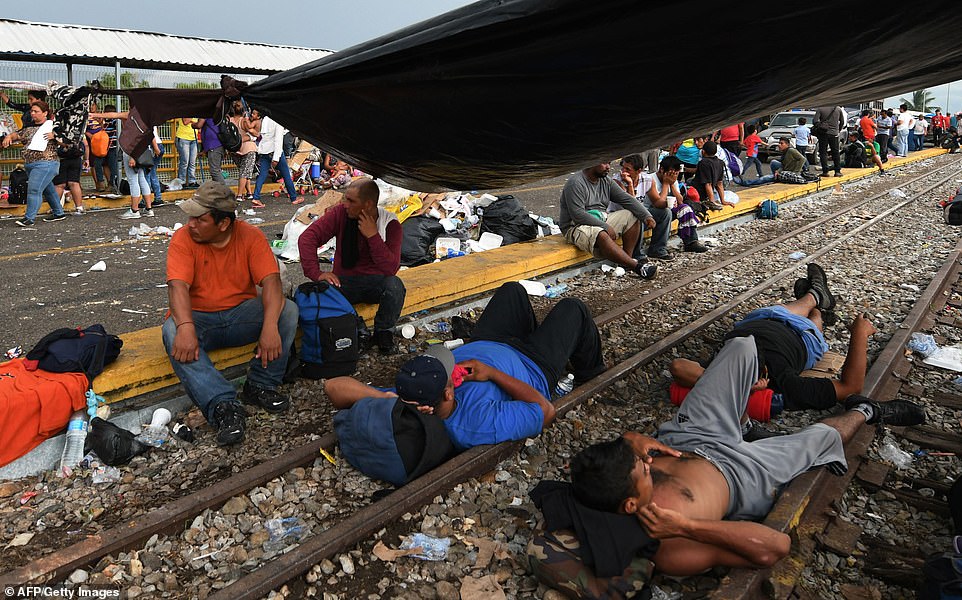 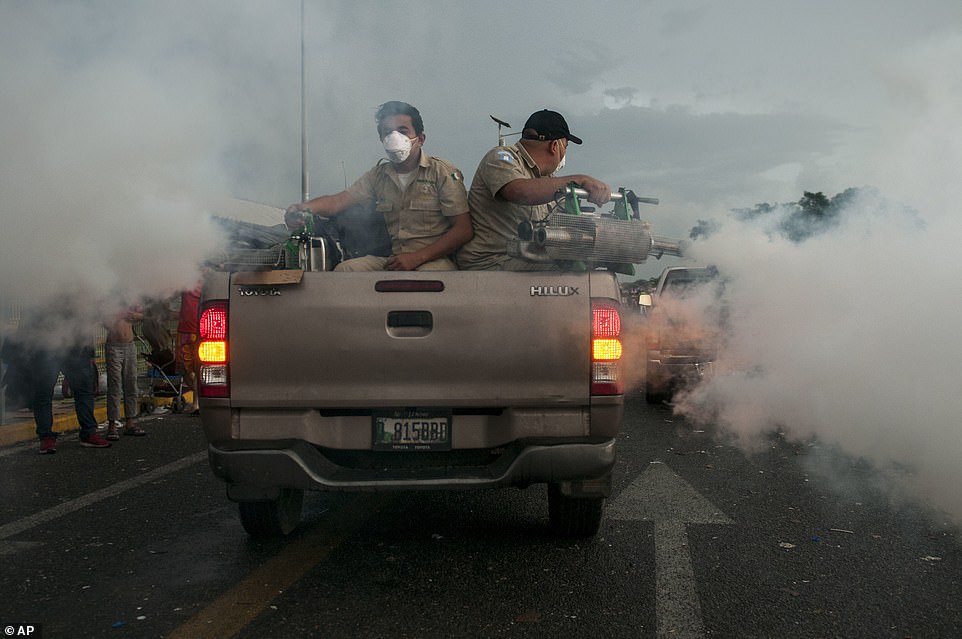 +19
Guatemalan officials fumigate the main bridge between their country and Mexico which has been crowded by thousands of migrants in recent days
'We shall work with our partners in the region to investigate and prosecute to the fullest extent of the law all who seek to encourage and profit from irregular migration.
'We fully support the efforts of Guatemala, Honduras and Mexico, as they seek to address this critical situation and ensure a safer and more secure region.'
Aaron Juarez, 21, a migrant walking through Mexico with his wife and baby while limping from an injury, vowed 'no one is going to stop us' from getting into the US. '[Not] after all we've gone through.'
Honduran farmer Edwin Geovanni Enamorado said he was forced to leave his country because of intimidation by racketeering gangs. 'We are tired, but very happy, we are united and strong,' he said.
Britany Hernandez added: 'We have sunburn. We have blisters. But we got here. Our strength is greater than Trump's threats.'
Mexico's President-elect Andres Manuel Lopez Obrador called for fair treatment of the migrants.
'We don't want them to face what (Mexicans) face when they need to look for work in the United States,' he said on Twitter. 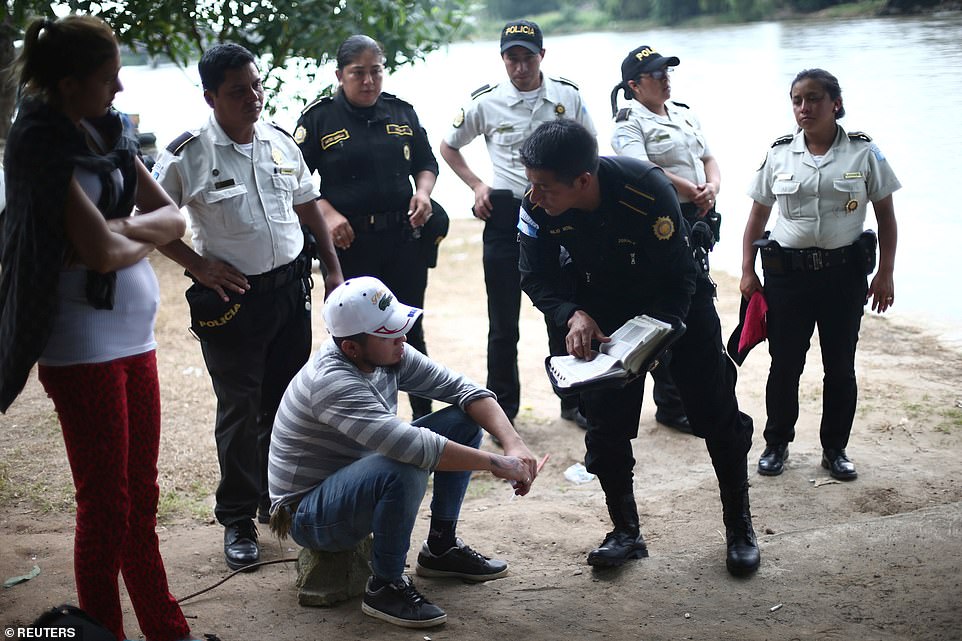 +19
Mexican officials question a migrant waiting to cross the border from Guatemala. Mexico says around 640 people have applied for legal asylum in their country 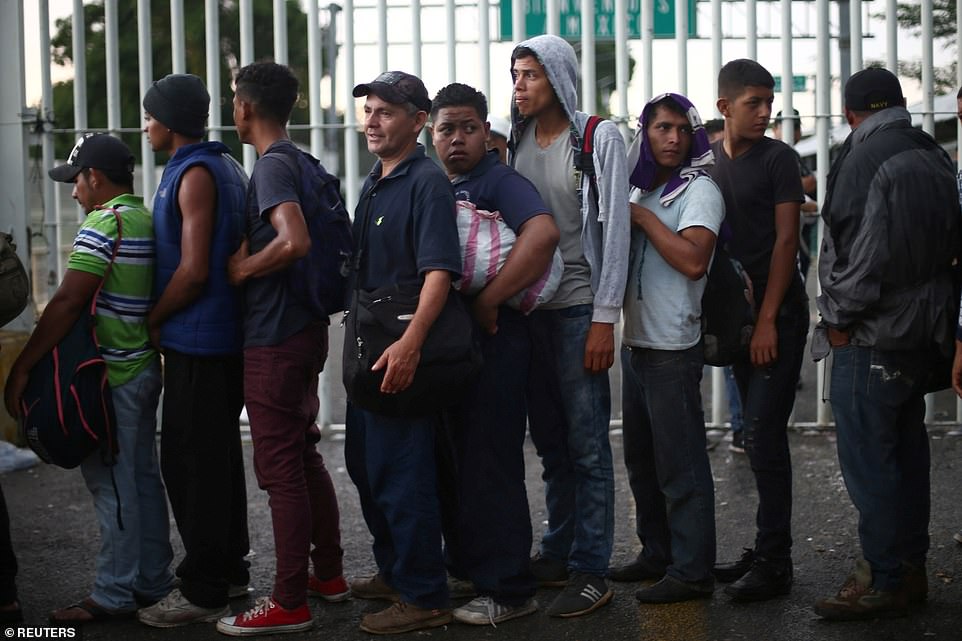 +19
Central American migrants, part of a caravan trying to reach the U.S, line up as they wait for the gate to open on the bridge that connects Mexico and Guatemala 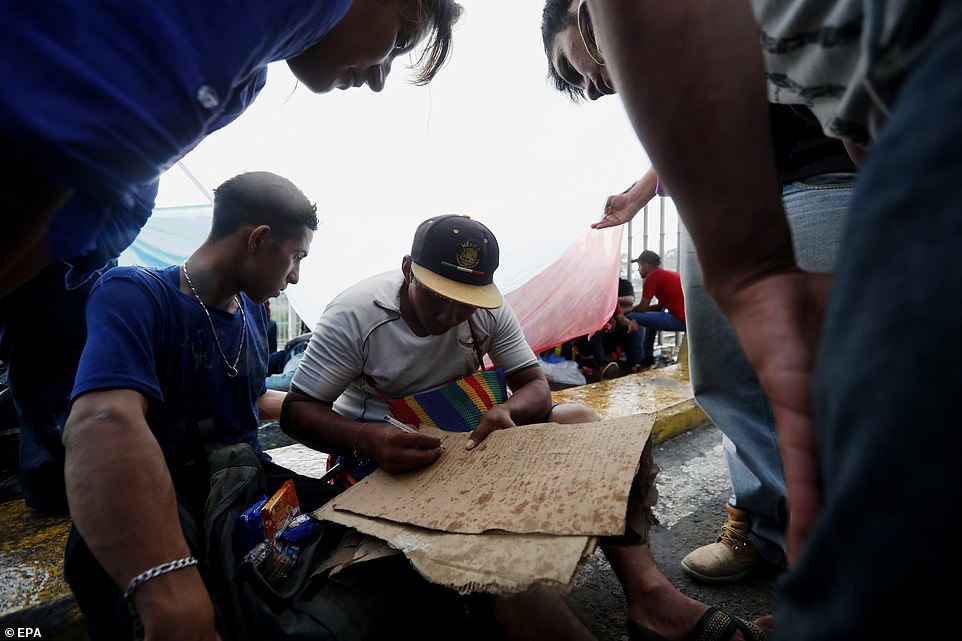 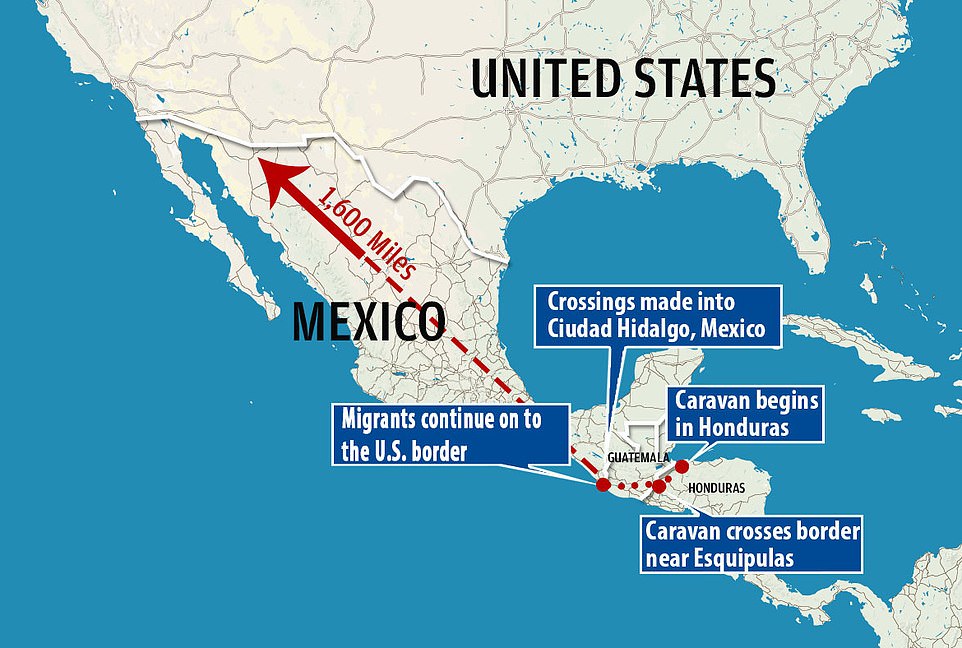 +19
The Caravan began its march in Honduras before crossing Guatemala. Around 3,000 have now made into into Mexico at Ciudad Hidalgo and are preparing for an almost 1,600 mile slog to the US border
The caravan left San Pedro Sula in northern Honduras more than a week ago, following a call on social networks relayed by a former Honduran deputy.
The politician, Bartolo Fuentes - a member of leftist former president Manuel Zelaya's Freedom and Refoundation Party - told AFP he only reproduced a poster on his Facebook page.
The poster invited people on a 'Migrant march' with a slogan: 'We're not leaving because we want to, but because we are being expelled by violence and poverty.'
Morales and his Honduran counterpart Juan Orlando Hernandez said after meeting that the march was 'violating the borders and the good faith of the states.'
The Honduran president acknowledged that social problems were a contributory factor.
'Without a doubt, we have a lot to do so that our people can have opportunities in their communities,' he said.
Migrants denied their motives were political.
'We decided to join those who were going,' said Edgar Aguilar. This is not political. This comes from hunger, from the drought, it's for prosperity, for a better life. This is not political!'
The migrants are generally fleeing poverty and insecurity in Honduras, where powerful street gangs rule their turf with brutal violence.
With a homicide rate of 43 per 100,000 citizens, Honduras is one of the most violent countries in the world, according to a Honduran university study.
Posted by HORN OF JUSTICE at 4:16 AM No comments: 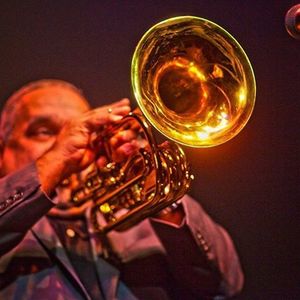 Willie Colón
Track to get notified about upcoming shows in your area.
TRACK